This church was erected in the 12th century by the son of Vladimir Monomakh, Prince Mstislav, on the opposite bank of the Volkhov from St Sophia’s Cathedral. Starting from the 13th century, it became the main church for the Novgorod veche, the highest legislature and judicial authority in the Republic of Novgorod, which gathered in front of one of the entrances.

Disgraced archimandrites and boyars took refuge in the cathedral to avoid being massacred by the hard-fisted crowd. Today visitors can see small fragments of ancient paintings: the Last Judgment, the Three Holy Hierarchs and Job on the Ashes, which are part of the unique heritage of Novgorod frescoes. The venue includes multimedia equipment to show 360 panorama films on the medieval history of Yaroslav's Court and St Nicholas Cathedral.

The St Nicholas Cathedral was erected as a princely church and part of the Yaroslav's Court compound. It was commissioned by Prince Mstislav (1075-1132), who was related to two of the most prominent royal families in medieval Europe: on the side of his father, Vladimir Monomakh, he was considered a descendant of the Byzantine emperors, and his mother, Princess Gytha, was the daughter of the Anglo-Saxon king Harold. Legend links the construction of the cathedral with the miraculous healing of Prince Mstislav. When he was overcome with a grave illness, the prince passionately prayed to St Nicholas of Myra. And the saint appeared to him in his sleep and said he would be healed through the agency of his image, an icon located in Kiev. When the embassy reached Lake Ilmen on their way home, it was held up by a terrible storm, which threw the ship against Lipno Island. On the fourth day, the icon was found floating on the waves. The prince got up to meet the icon with honours and was soon healed. So Mstislav built a cathedral in Novgorod dedicating it to St Nicholas the Wonderworker.

It is the oldest St Nicholas church in Russia that has survived to this day. Its architecture goes back to the Kievan tradition. A stout four-pillar structure with a narthex in the western part, it has four tiers of windows and niches of the same shape. In 1994, the New Hansa union of North European cities launched a comprehensive restoration project, restoring the rounded gable heads and the five domes. Although little has survived of the original 1117 frescoes, the basement still contains fragments of the oldest Last Judgment image in Russia and the Job on the Ashes. During Nazi occupation, the cathedral was used as barracks. It is currently open to the public. In addition to the interior and surviving fragments of its frescoes, visitors can see an exhibition dedicated to the restoration of the cathedral, a virtual panorama of Yaroslav's Court and the Great Volkhov Bridge, as well as temporary exhibitions. 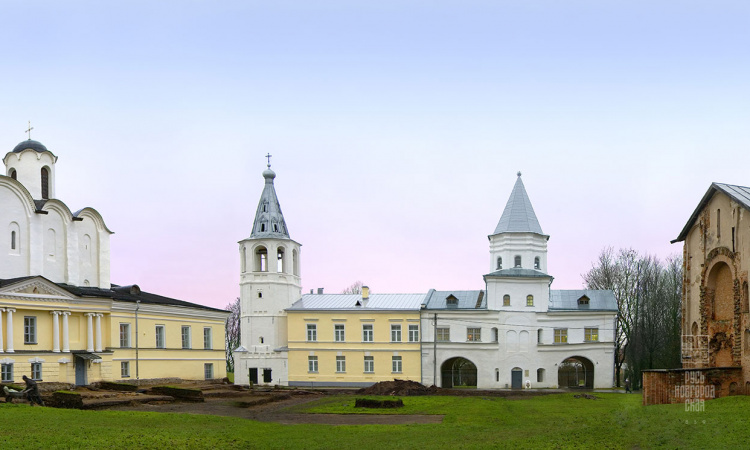