The Church of St Theodore Stratelates in the village of Verekhnovo, Volotovsky District, was built in 1895.

The parish priest is Sergy Yeremin.

Verekhnovo parish dates back to the late 18th – early 19th centuries. At the time, a military unit was stationed in the area, so there is little wonder the local church was consecrated to the holy warrior Theodore Stratelates.

The present-day church is not the first one in this place. The previous one burned down in 1893, and a new church was built in two years.

The villagers helped built their church sparing no effort or money.

Before the church was closed in 1937, its iconostasis shone with gilding, and a huge crystal chandelier sparkled with lights under its dome. Its last priest before the 1917 revolution was John Derzhin. His mother, Yevstolia, was from the Brilliantovs, a well-known clergy family in Russia.

In 1937, Verekhnovo parish priest Jacob Pavlov was arrested and executed.

After the church was closed, many icons were taken away, and the building was used for a local club. During the Great Patriotic War, the Nazis set up an observation post on the bell tower. The roof was badly damaged by air bombs, and the bells had holes in them.

In 1942, the church became active again, with the priest Alexy Georgievsky from Porozhki serving there. In the autumn of 1943, the Germans took Father Alexy to the Baltics, and Father Mikhail Nikitin from the Derglets village church performed further services.

In June 1944, the Soviet authorities closed the church again. However, in 1947, after numerous petitions from believers, a parish was reestablished and the church reopened. Priest John Sergeyev, a native of Kloptsy, a former frontline soldier who later earned a degree from the Leningrad Theological Seminary, was appointed rector.

In 1954, Father John was transferred as rector to Porozhki, and priest Ilya Karlikov came to serve in Verekhnovo from 1956 and until the church was closed in 1961.

In 1989, the church was returned to the diocese; on Easter Day in 1991, it was consecrated by Archimandrite Agafangel (Dogadin), then archpriest of the Starorussky District.

In 1998, the church was renovated with donations.

It is a tradition to hold a procession around the church after the Liturgy on the patronal feast on 21 June. 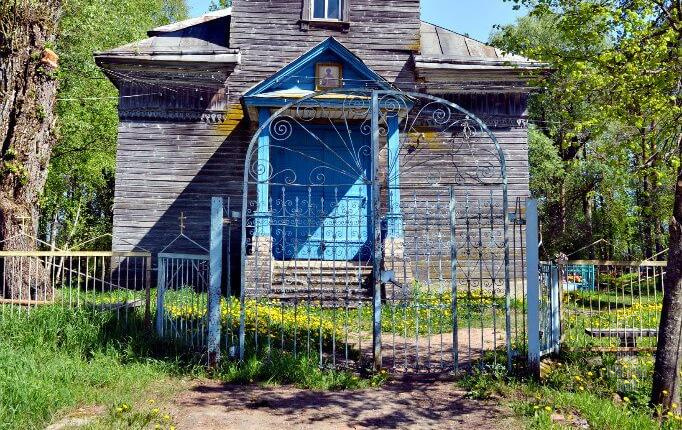