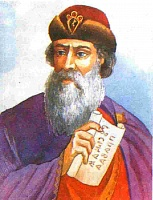 Prince Yaroslav the Wise was born in 978. His father, Prince Vladimir, sent him to govern Novgorod.
People called Yaroslav “wise.” Indeed, he did much to enlighten the Russian land. It was he who founded the first public school in Novgorod and the princely library. As a legislator, Yaroslav ordered to codify the Russian law in what came to be known as the Rus Truth. During his rule, the Kiev Pechersk Lavra was founded to become the centre of Russian chronicle writing. It was also Yaroslav who ordered that the metropolitan be elected for the first time without the interference of the Constantinople Patriarch.
Little is known about Yaroslav’s rule in Novgorod before 1014. The Prince’s Court was on the Market Side of the Volkhov River. This place came to be known as Yaroslav’s Court.
So far, archaeologists have unearthed only one lead seal that belonged to Yaroslav the Wise. It used to be attached to a certificate. It shows St George with a spear and a shield and his name on the one side, and on the other a man wearing a cloak and a helmet, quite young, with a big moustache, but no beard and an inscription: Yaroslav, Prince of Russia.