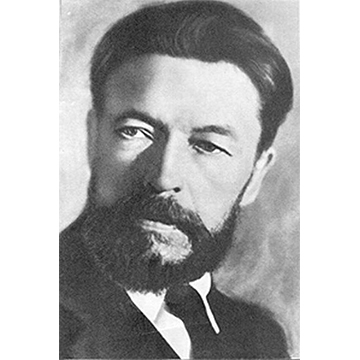 Vyacheslav Shishkov was a prolific Russian writer, best known for Gloomy River and Yemelyan Pugachev. He started publishing his work in 1908, perpetrating the literary traditions laid in the previous decades by democracy activists. He came to the Msta on a field trip from the Vyshny Volochok Technical College, where he studied from 1888 until 1893. He worked on the Berezaikovsksy and Uversky dams, while staying in Verkhopyatnitskaya’s house in Opechensky Posad. His vocation as a writer started to crystalise at that time. As he wrote later, he would put down in his notebook “… all kinds of interesting stories, expressions and words” that he heard “from workers and rural folk…” He returned to Opechensky Posad in 1925. Later he stayed at a hotel resort for writers in the former Zhdani estate located eight kilometres from Borovichi along the Msta River. This was his last visit to the region. He spent it working on the Gloomy River, with the muted splashes of the Msta in the background. The house where he stayed in Opechensky Posad is still there, on the village’s 1st lane, with a memorial plaque in the writer’s memory.