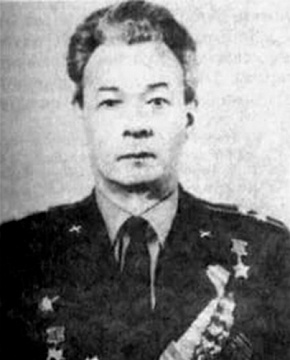 Stepan Nikitin was born on 27 December 1904 into a family of a railway worker who lived in Verebye, a station of the Nikolayevskaya Railway, which linked Moscow to St Petersburg. His father Andrei and mother Apollinaria had seven sons and four daughters. Andrei worked as a switcher, while his wife took care of the children. Stepan graduated from a seven-year school, and worked at a glass factory near the Msta station, in Tver Region’s Udomelsky District. In 1923, he came to a local conscription office and insisted that he be recruited into the Red Army. In August of the same year, he was sent to a school in Ivanovo-Voznesensk as a cadet, and in October transferred to the military school of the All-Russian Central Executive Committee in Moscow and studied there until 1927. This institution exists to this day with its cadets serving in the Kremlin’s guard of honour, including by the Lenin Mausoleum since 1924.
Upon his graduation in 1927, Nikitin commanded an artillery regiment. An educated and capable officer, he moved up the ranks quickly to become a battalion commander in just three years.
In 1930, Stepan Nikitin enrolled in the Kharkov Military Maintenance and Administration Academy. Having graduated in the rank of a major, he headed a testing range near Leningrad. When the 1939-1940 Finnish war started, he asked to be transferred into the field forces, but the war on the Karelian Isthmus was over before his application was reviewed.
When the Great Patriotic War broke out, Nikitin was serving in Brest as a Red Army Major, heading the quarters of the 42nd Rifle Division. His unit faced heavy combat while retreating southeast. Near Kiev, his artillery unit, together with other divisions from the same front, were encircled by the enemy.
In March 1942, already a colonel, Nikitin commanded the 543rd Light Artillery Regiment of the High Command reserve.
Soon, his regiment was dispatched to reinforce the 47th Army of the Bryansk Front, where Stepan Nikitin, together with another commander, accomplished a true feat by breaking the Nazi’s lines. For his success as the leader of the operation near Livna, Stepan Nikitin received the Order of the Patriotic War, 1st grade.
Stepan Nikitin also fought in the bloody Battle of Kursk.
The Berlin offensive started on 14 April 1945. The Soviet troops overpowered the enemy in its last-ditch efforts to stop them, advancing steadily, albeit slowly, toward the German capital. In the early morning of 30 April, the fierce battle for the Reichstag started. The end of the journey was near, but it took a great effort to complete it. Huge concrete barricades blocked the streets, with artillery and tanks sheltered behind them. The battle continued all day. Several units approached the Reichstag, with their soldiers and commanders eager to be the first to put an end to the Battle of Berlin.
The Victory banner appeared above the Reichstag’s dome in the early hours of 1 May. Berlin fell. Six artillery soldiers from Nikitin’s unit were among those who flew the Victory banner on the building. This is how Nikitin, already decorated multiple times during the war, received the Hero of the Soviet Union star.
Stepan Nikitin continued to serve in the army until the late 1940s, and retired in 1949. He lived in Leningrad, but often visited Verebye, where his spent his childhood and teen years.
Having retired, Stepan Nikitin dedicated himself to community service and helped teach soldiers of the Leningrad garrison.
As a Hero of the Soviet Union, Stepan Nikitin saw his name inscribed on the district board of honours. The administration of the Verebye rural district gave his name to a branch office of the Malay Vishera Central Library in Verebye.