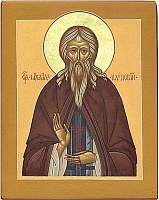 Michael came from a noble family and related to Great Prince Dmitry Donskoy (died in 1389). However, he chose to become a Fool-for-Christ, left Moscow and came to the Klopsk Monastery near Novgorod where no one knew him. In fact, it took quite some time before his identity was discovered. In 1419, Dmitry Donskoy’s youngest son, Prince Konstantin, lost his apanage and came to Novgorod, where he had already served in 1408 as the Great Prince’s representative. People remembered him and were happy to welcome him back. During a dinner Michael was reading from the Book of Job. Hearing his voice, Prince Konstantin stood up, approached the reader, looked him in the face, recognised him and bowed to him saying: “This is Michael, son of Maxim, he belongs to a princely family.”
Reverend Michael was a role model for all the monks in their monastic undertakings. He lived in the Klopsk Monastery for 44 years, sparing no effort working, praying and suffering various deprivations. God did not want the identity of this great devotee to remain unknown, and people learned who he was. Michael also possessed the gift of prophecy and could work miracles.
At the time, there was a drought in and around Veliky Novgorod with no rainfall in three years. Not only creeks, but even large rivers went dry. However, reverend Michael wrote on the sand: “I will take the chalice of salvation; and I will call upon the name of the Lord” (Psalm 115:4). There will be an inexhaustible water source here.” And water started flowing. When famine came, the monastery had little left in its cellars, but Michael insisted that no one went hungry, and no matter how much bread the monks fed to the people, it never ended. This saint exposed people for their sins and was not afraid of those who had power. He predicted that Great Prince Ivan III, who ruled from 1462 until 1505, would be born on 22 January 1440 and would annex Novgorod. Michael exposed Dmitry Shemyaka for his malice and predicted his death, but in vain. Many of his prophecies, both relating to specific people and Novgorod, came true.