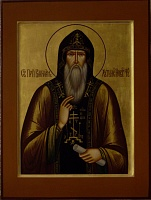 Varlaam of Khutyn lived in the 12th century. Born into the family of a Novgorodian nobleman, he spent his early years in Novgorod. As a teen, he entered the Lisichy Monastery and became a monk. Later, he settled on a lone mount about 10 km from Novgorod overlooking the Volkhov River, in an area called Khutyn, and lived there as a hermit. Life was not easy for him, but he spent it praying and fasting. He also worked a lot: cutting trees, making firewood, working the land, for the Holy Bible says: “If a man will not work, he shall not eat” (2 Thessalonians 3:10). People started coming from Novgorod to see him and help him in his devout labour. Varlaam acted as a pastor and told his flock: “Beware of lies, my children, keep away from envy or libel. Do not be angry, and do not lend money at an interest. Beware of making unjust rulings. Do not lie under oath and fulfil your promises. Keep away from corporal pleasures. Stay meek and loving. This virtue is the root of all good.”
It didn’t take long before the Transfiguration Church was built, and a monastery established around it. With God’s help, reverend Varlaam performed miracles and was able to see the future. Right before Varlaam’s death, monk Antonius, his peer and friend, arrived from Constantinople. Seeing him, Varlaam said: “My beloved brother, God blessed this monastery. I now hand it over to you. Take care of it, while I leave this world to join the Almighty. Do not be afraid: my body is leaving you, but in my spirit, I will always be by your side.” These were his instructions to the monks. He told them to safeguard the Orthodox faith and be humble, after which he passed away on 6 November 1192.