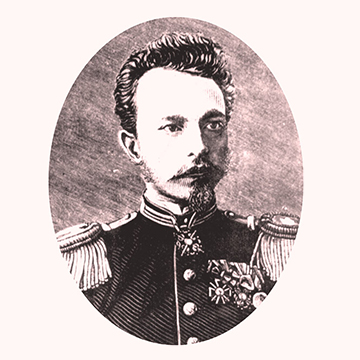 Pavel Kalitin was born on 30 August 1846 into a noble family of small landowners in Pskov Province’s Kholmsk District. Prominent Russian General Alexei Kuropatkin was his cousin.
Pavel Kalitin studied at the St Petersburg Cadet Corps and the Pavlovsk Military College, graduating in 1865. He then joined the Orenburg combat battalion, later renamed 1st Turkestansky Rifle Battalion, as a second lieutenant.
His life was short and he spent it in combat. In 1866-1868, he took part in a campaign against the Khanate of Bukhara and distinguished himself during the siege of Ura-Tyuba. In 1873, he was on the campaign to conquer the Khanate of Khiva and went on to fight in the conquest of the Khanate of Kokand in 1875-1876. He received several medals and titles for his military feats, including the Order of St Vladimir, 4th Class, with swords and a bow, and a golden sabre with a For Valour inscription.
For his distinguished service during the attack on Makhram, Pavel Kalitin was promoted to the rank of lieutenant-colonel. When the Russo-Turkish War broke out in 1877, Kalitin volunteered for the Dunai theatre of operations, where he headed the 3rd Bulgarian militia squad.
During the Battle of Stara Zagora on 19 July 1877, the Turkish army launched an offensive and forced their enemies to retreat. To stop their advance, Kalitin decided to launch a counterattack, even though he already had two minor wounds. The squad’s standard bearer was killed during a bayonet assault, and the standard, presented to the squad by the city of Samara, fell to the ground. The Turks were ready to pick it up. This is when Kalitin dismounted from his horse, lifted the banner and cried out to his men: “The standard is ours! Follow it, follow me!” Inspired, the militia men followed him in the attack and overpowered the enemy, but Kalitin, sitting upright in his horse with the banner in his arms, was hit by three bullets.