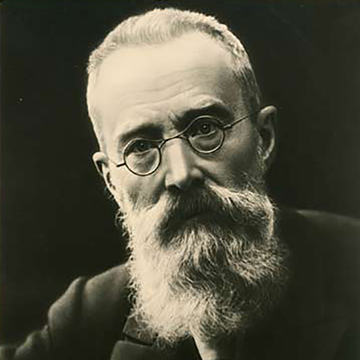 Nikolai Rimsky-Korsakov was a famous Russian composer, conductor and Professor at the St Petersburg Conservatorium, who taught prominent composers including Anatoly Lyadov, Alexander Glazunov, Alexander Spendiarov, and Igor Stravinsky. He stayed with his family at the Krapachukha estate in the Borovichsky District, during the summers of 1901 and 1903. In 1901, the composer benefited from his stay there to work on his opera Kashchey the Immortal, with the libretto based on Yevgeny Petrovsky’s play Ivan Korolevich, although the composer adjusted the text to suit his design. He returned to the estate he liked so much to spend the summer of 1903 there. This time, he worked on the opera The Legend of the Invisible City of Kitezh and Maiden Fevroniya, while also continuing to write the opera Pan Voyevoda. Locals later recalled that the estate’s main house burned down “on New Year’s Day during the revolution.” Today, there is nothing but a forest where the estate once stood.