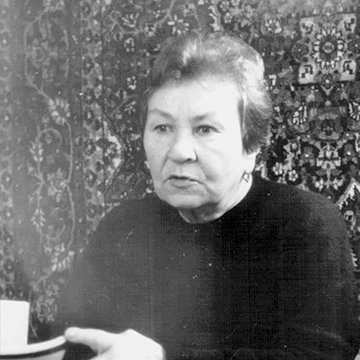 Talented Russian poet, prose writer and translator who published about 40 poetry and prose collections for both young and old. Nadezhda Polyakova was born into a family of peasants and workers, who lived in a homestead near Basutino, Borovichsky District, Novgorod Province. She graduated from a secondary school in Leningrad. When the war broke out, she worked behind the lines, reinforcing defensive structures and joined the army in 1943. After the war, she enrolled at the Leningrad University and started publishing poetry collections one after another. She also wrote articles on Russian classical literature, including on Pushkin and Gogol, as well as several wonderful children’s books. With the dawn of a new era and until her very last day Nadezhda Polyakova continued to write. She often visited her beloved Msta River to meet her readers. Her last visit dates back to the 1980s.