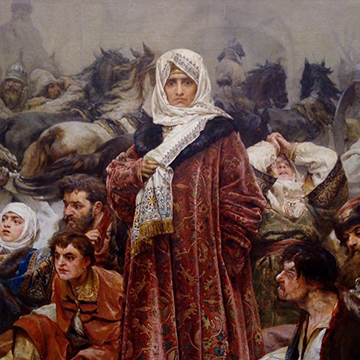 Marfa Boretskaya was born in Veliky Novgorod, but the date of her birth is unknown. She was married twice. Her first husband was Filip, a nobleman, with whom she had two sons: Felix and Anton. Her second husband was Isaac Boretsky, a descendant from a prominent Novgorodian family who had the title of Posadnik (Mayor).
This gave Marfa substantial political influence. Highly regarded by the people around her, she was often referred to as Marfa the Republican for her vehement opposition to attempts by Grand Prince of Moscow Ivan III to annex Veliky Novgorod. Marfa Boretskaya called on the people to fight back against the Moscow prince, organised rowdy political assemblies and spoke eloquently to convince people to join her in this cause.
People trusted Marfa and were ready to fight with her against Moscow, but little did they know about the dangers they were exposing themselves to.
The Novgorodian nobility dreamt of establishing an Orthodox viceroyalty in the city, headed by the Lithuanian king. There were strings attached to this deal. The new ruler had to take Marfa as his wife. The people of Novgorod agreed to live under Casimir’s rule, hoping that he would show mercy. Marfa manoeuvred and engaged in opaque dealings to bribe the city poor into speaking out against Ivan III and for Casimir during city assemblies.
Upon learning of the dealings with the Lithuanian king, Ivan III assembled an army and headed for Novgorod. The battle took place on Shelon River that ended in Moscow’s victory. Marfa’s son, Dmitry, was executed, and Foma became the new mayor.
It was only 13 years after that battle, in 1484 that the Grand Prince of Moscow ordered Marfa Boretskaya’s arrest, together with her grandson – Dmitry’s son. Ivan III confiscated her property. She was then executed and buried near Mleva, a small village.