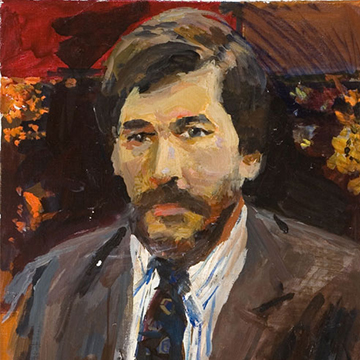 Leonid Malyshev was a talented painter and graphic artist, who learned his craft from artist Yelena Grenfeldt (1903-1980). Born in Borovichi, he lost his parents at a young age. His father died on the frontlines, and his mother passed away too. Leonid ended up in an orphanage in Yakovishchenskoye (present day Moshensky District), where he stayed until the end of seventh grade, and then moved in with his relatives in Borovichi, where he continued his secondary education. Leonid Malyshev held his first exhibition in 1984 in the Cultural Centre of the Borovichi Refractories Factory. He went on to show his work at the Borovichi local history and lore museum, as well as in Novgorod, Binghamton, US, and other locations. His paintings were like children to him, making him reluctant to part with them. He rarely presented them as gifts or offered his work for sale. However, all the 25 or so paintings he showed at the Binghamton exhibition were quickly sold. Leonid agreed, albeit not without remorse, for he needed the money to pay for foreign medicines he had to take after a complex surgery to stay alive. After his passing, the Borovichi museum staff gathered a substantial collection of paintings and graphic works to create what can be referred to Leonid Malyshev’s golden fund.