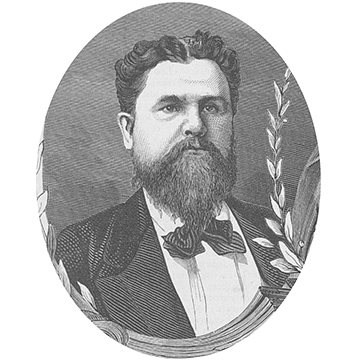 Fyodor Nikolsky was a famous Russian singer, heldentenor, soloist in the St Peterburg Court Chapel and Mariinsky Theatre. Born in Borovichi into a the family of a priest, he enchanted his listeners with his clear and at the same time deep and flexible voice. A stage director from the Imperial Opera, I. Setin, heard his singing, and invited him to join the Mariinsky Theatre’s company. For his debut performance, Nikolsky sang Sabinin’s part in Mikhail Glinka’s opera A Life for the Tsar. In 1862, the theatre sent Nikolsky to study opera singing in Milan, but upon his return they thought that improving his overall performing skills came at the cost of losing his simple and sincere manner of singing. Some of his listeners compared him to famous Italian opera singers of their time such as Enrico Tamberlik or Giovanni Battista Rubini. “This tenor is a diamond, a rare tenor currently unrivalled around the world,” music critic Alexander Serov wrote. However, the singer’s career ended prematurely, and after 1871 he left St Petersburg and returned to Borovichi.