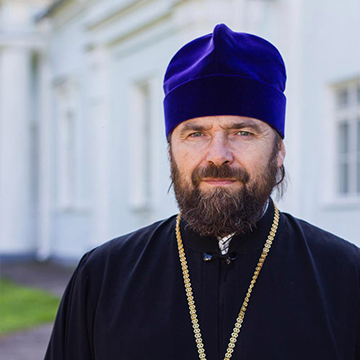 Archpriest of the Holy Assumption Cathedral in Borovichi, Father Ioann is one of the most respected and revered spiritual leaders in the city. He was born in Velikaya Luka, Ternopolsky District, Ternopol Region, into a priest’s family. His father and both of his grandfathers were prominent archpriests, while his uncle was a monk and became an archimandrite. The entire family looked up to Metropolitan Veniamin (Fedchenkov), a prominent church leader and writer, for guidance. Ioann Moroko graduated from secondary school in 1982, served in the army in 1983-1985, and then studied at the Moscow Theological Seminary in 1986-1988. Upon his graduation, Archbishop of Dmitrov Alexander, who stood at the head of the Moscow Spiritual Seminary and Moscow Spiritual Academy, ordained Ioann as a deacon. On 24 January 1988, Ioann acceded to priesthood. It was also in 1988 that Father Ioann enrolled at the Moscow Spiritual Academy, from which he graduated in 1992. He started his priesthood in the Ternopolskaya eparchy, heading the Church of the Holy Great Martyr Demetrius in Ostrivets, Church of St Nicholas the Wonderworker in Zastinoch, and the Church of the Nativity of the Most Holy Mother of God in Zubiv. In 1992, Bishop of Ternopol and Kremenetsk Sergy appointed Ioann to head the Terebovlia diocese. In 1994, he was transferred to the Novgorod eparchy, and on 22 June of the same year the Bishop of Novgorod and Staraya Russa appointed him as the archpriest of the Holy Assumption Cathedral in Borovichi. Religious services resumed in this church in 1990 after a 30-year pause, marked by decay which left little of the cathedral’s former splendour. It took great effort to restore the building. This included repairing the facade, building a fence around the church, improving its territory, painting wall murals inside and buying many icons. The young priest strived to shape his congregation as a community of Orthodox believers and mend their “souls just as he restored the church building.” He created a Sunday school for young and old, and taught the basic principles of the Christian morality at a teacher training college, as well as in a medical college (since 1997) and in a local secondary school (since 1996). Since 2008, he has also been holding the Lesson of Orthodox Faith on a local television channel and in school No. 8. His church has been publishing a monthly newspaper, Khram, since 1998. To mark the 200th anniversary of the Assumption Cathedral in 2000, Father Ioann published a historical essay on the church’s history. Father Ioann’s wife, Mother Larisa (Moroko), created the church choir and has been leading it ever since. The choir performs during church services, and gives concerts on festive occasions for the congregation and guests, as well as at the Borovichi cultural centres and at Church singing festivals. Those of the parishioners who appreciate church singing can enjoy the choir’s two CDs. The Holy Assumption Cathedral Church features prominently in the Borovichi Orthodox community. For his efforts, Father Ioann received an honorary certificate from Patriarch of Moscow and All Russia Alexy in 2002, as well as the Order of Recognition in 2008. In March 2012, Ioann was appointed archpriest of the Borovichi diocese within the Borovichi eparchy.