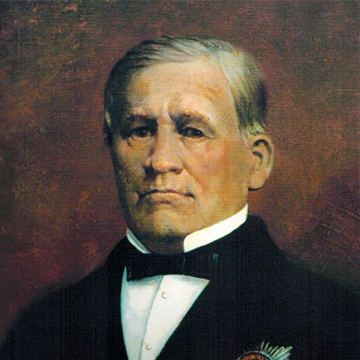 Dmitry Zamyatnin was a prominent 19th century statesman. Upon graduation from the Tsarskoye Selo Lyceum in 1823, he devoted 17 years to creating the Code of Laws of the Russian Empire. In 1841, he headed the heraldic office at the Ministry of Justice, became the Chief Prosecutor of the Senate’s 2nd Department in 1852, and then Deputy Minister of Justice in 1858. Appointed the Justice Ministry’s chief of staff in 1862, he went on to serve as Minister of Justice and Prosecutor General in 1864-1867. The judicial reform was Dmitry Zamyatnin’s key undertaking. The court statutes radically transformed Russia’s judicial system and procedures by instituting the equality of all social classes before the law, introducing jury trials, etc.
In the 1830s, Dmitry Zamyatnin married Yekaterina Neklyudova, who inherited Gverstyanka, a prosperous estate in the Novoselitskaya area near Borovichi. There are reasons to believe that it was the young master who initiated a large-scale renovation of the estate in the 1840s. It was at that time that the neo-gothic castle was built there.