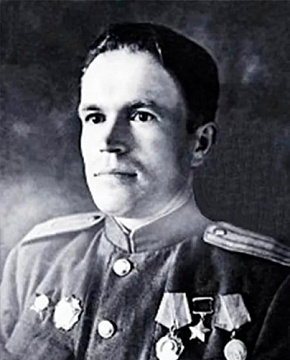 Alexei Nikolayev was born on 12 February 1915 in Sharya, a small village that later became part of the Malovishersky District. In July 1941, the Malaya Vishera district conscription office called on Alexei Nikolayev to join the Red Army, where he served as a sergeant of the 52nd Army’s 254th Division. It was this army that liberated Malaya Vishera from the Nazi invaders on 20 November 1941. Alexei Nikolayev went on to fight the battles of the Lyuban offensive operation and was wounded, receiving his first medal for his service. Once he recovered, he took a short training course for commanding officers, and after that insisted on returning to the 52nd Army. In 1944, he took part in liberating southern Ukraine at the head of the 929th battalion of the 52nd Army. Having liberated Uman, the advance unit of his regiment approached the Southern Bug on 10 March. With his battalion, Captain Nikolayev crossed the river on boats and other crafts to gain a foothold on the right bank and set the stage for an offensive. In the process, they killed 120 enemy soldiers and officers, and took 20 prisoners. After that, the army continued its offensive along the Dniester and secured a bridgehead for launching the effort to liberate Moldova. Once again, Nikolayev’s battalion rose to the occasion. Under heavy enemy fire, Nikolayev was first to cross the USSR state border by forcing the Prut. His troops entered Romania and gained a foothold on the river’s right bank. They managed to hold it for 24 hours until the regiment’s main forces arrived. During this battle, Nikolayev’s battalion destroyed 8 tanks and killed many German soldiers. This was the first time the battalion got to operate in enemy territory. The news about this resonated across the Soviet Union. On 13 September 1944, Alexei Nikolayev received the Hero of the Soviet Union title for his exceptional leadership during offensive operations, as well as for his courage and heroism. After the war, the Malovishersky District deputies elected Alexei Nikolayev chair of the District Executive Committee. He contributed to bringing electricity to Malaya Vishera. Until 1949, local schoolchildren had to use kerosine lamps when doing their homework, but Nikolayev found an engine from a US ship and the necessary equipment in Leningrad. In the summer, the engine started humming in the village’s boiler room, lighting up Malaya Vishera buildings. Alexei Nikolayev retired from his local government office in 1954 and agreed to head the Novaya Zhizn collective farm in the Sharinsky Rural Council. Four years later, in 1960, the district officials asked the reginal government to transfer the Sharinsky Rural Council to the Dregelsky District, and four years later it became Lyubytinsky District. Alexei Nikolayev passed away in 1982. During his lifetime, he received the orders of Lenin, Alexander Nevsky and Red Star, as well as several medals.