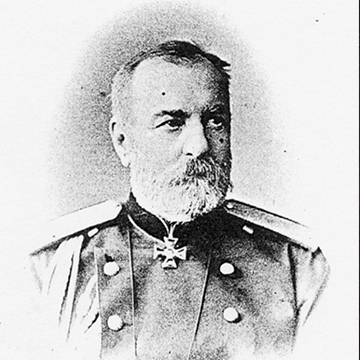 Alexei Maksheyev was a researcher and explorer of Central Asia, Professor of the General Staff Nikolayevskaya Academy, Lieutenant General. Almost all his work focuses on Central Asia. These include The Aral Sea Described, A Journey Across the Kyrgyz Steppes and Turkestan, Turkestan: A Historical Overview. In 1860, he received the post of military statistics professor at the Nikolayevskaya Academy. In 1864, he joined the advisory committee within the General Staff’s Main Directorate and received the rank of Lieutenant General in 1879. The Maksheyevs were an ancient noble family that were known in the Novgorodian land since the 16th century. As a military writer, Alexei Maksheyev published an essay on his ancestry and its holdings in the 8th collection of works by the members of the Novgorodian Antiques Lovers Society. From his mother, he inherited the Olekhovo estate and 830 desyatinas of land (approx. 2,200 acres) in the Dolgovskaya area, Borovichsky District. This estate overlooks the beautiful Lake Kabozha (Velikoye), which made it the favourite summer retreat for Maksheyev’s family with his six children. The Borovichi local history and lore museum preserves some archives from this estate on the Linyov-Makheyevs, who were landowners from Ustyug and Borovichi. Among other papers, there is Maksheyev’s hand-written plan on rationalising fishing on Lake Kabozha (Velikoye), explaining to the locals that this activity had a future there. A granite stone now sits on the place where the estate once stood in the Moshensky District with a stainless steel plaque saying: “Here in Olekhovo estate lived Russian geographer and Central Asia researcher, military historian and cartographer, a friend of Taras Shevchenko.