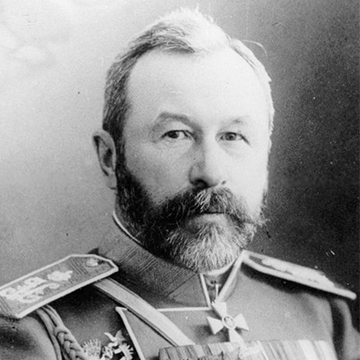 Alexei Kuropatkin graduated from Pavlovsk Military College and the General Staff Academy, served in Turkestan, and distinguished himself in combat under General Mikhail Skobelev, earning the Order of St George, 4th Class.
Kuropatkin was a Lieutenant Colonel when the 1877-1878 Russo-Turkish War for the liberation of Bulgaria broke out. He fought in the Balkans, where he headed the quarters of an infantry division, and once again distinguished himself as an effective, hard-working and educated officer. For his service, he was promoted to the rank of colonel, and awarded a golden sabre and orders of St Vladimir, 3rd Class, St Stanislav and St Anna, 2nd Class. It was also in the Balkans that Kuropatkin was badly wounded and had to leave the frontline. After recovering, he served in the General Staff on the key matters of strategy.
In 1898-1904, Alexei Kuropatkin served as the defence minister and made a great contribution to reinforcing the combat readiness of the Russian army.
During the 1904-1905 Russo-Japanese War, he commanded the Manchurian Army, and was also Commander in Chief in the Far East.
Russia lost the war, and Alexei Kuropatkin assumed full responsibility for the debacle. He withdrew to his estate, Sheshurino, in the Kholmsk District, and dedicated himself to agriculture, the arts and educational endeavours. To improve vocational training, he opened a rural school in Yablonevo. He also helped open a local hospital and a public library. But it was the founding of the Kholmsk People’s Museum in 1920 that became his biggest achievement. He also served as its first curator. Alexei Kuropatkin was also a prolific writer.