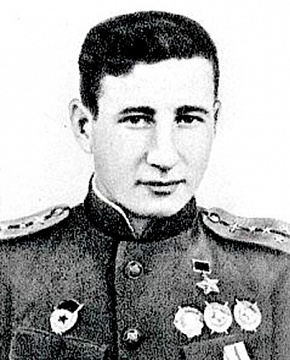 Alexander Martynov was born on 5 December 1919 in Podmoshye, a village in the Leningrad Region’s Lomonosovsky District. His family moved to the Novgorod Region, and after four years of schooling teachers advised Alexander’s mother, Maria, to make sure that her son continued his studies. He attended a seven-year school in Burga, graduated from it, and continued his secondary studies in Malaya Vishera’s School No. 1. His teachers insisted that he enrol in a higher education institution, but the young man was dreaming of becoming a pilot.
He was in a training camp when the combat alert came on 22 June 1941. All the pilot trainees were quickly dispatched to newly formed fighter regiments. Martynov served in a guards unit, which engaged in one battle after another. He took part in 70 aerial combats and performed over 360 combat flights. One of the best pilots in his unit, he led a YaK-1 squadron and was promoted to the rank of lieutenant. Soon, the first stars appeared on the fuselage of his plane, with one star for every downed enemy aircraft.
As a pilot, Alexander Martynov earned his fame after the air battle over Lozovaya station on 9 March 1942. On 12 March 1942, Krasnaya Zvezda, a national newspaper, printed an article titled Seven against Twenty-Five. It told the story of seven Soviet fighter planes who waged a battle against 25 Nazi planes, managing to down seven of them and return to their airbase without sustaining any losses in their ranks.
A courageous pilot, Alexander Martynov had two combat wounds. Once, his plane was severely damaged, but the pilot, also wounded, still managed to land the machine and stay alive. Overall, Martynov downed 17 aircraft on his own, and another 16 during group engagements. On 12 August 1942, he received the Hero of the Soviet Union title for his valour, courage and unrivalled skills. He was the first to receive this prestigious award among Malaya Vishera residents. Afterwards, he earned two Orders of the Red Banner, two Orders of the Red Star, and the Order of the Patriotic War, 1st Class, as well as 13 medals for his further battle engagements. He continued to serve in the Air Force after the war and left the army only in 1956. He moved to Novgorod and joined the civilian aviation. Alexander Martynov passed away on 4 June 1980.