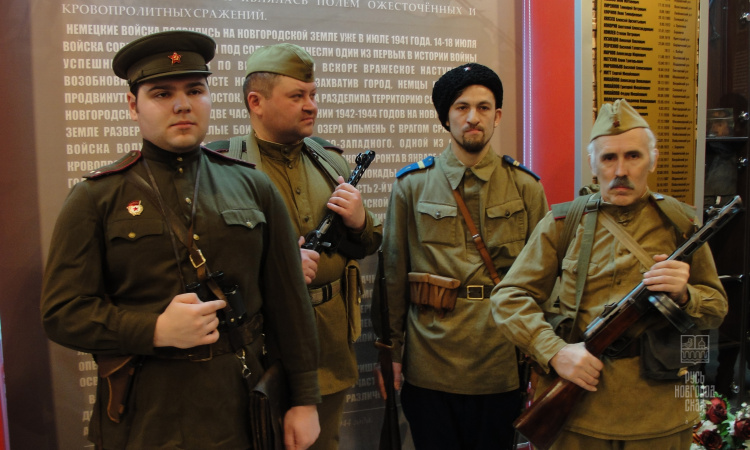 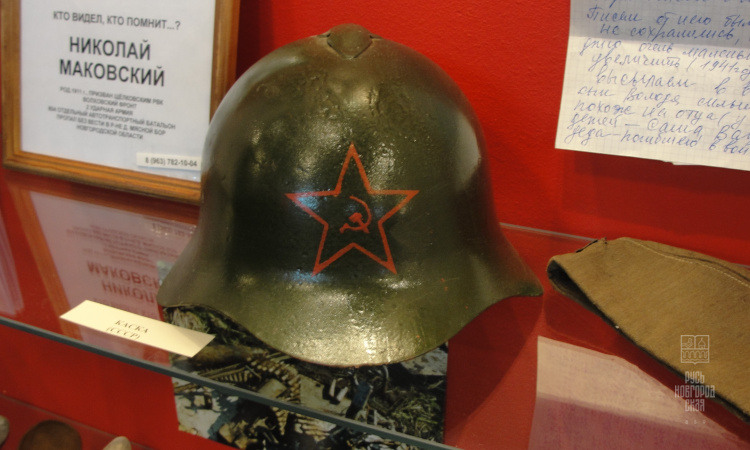 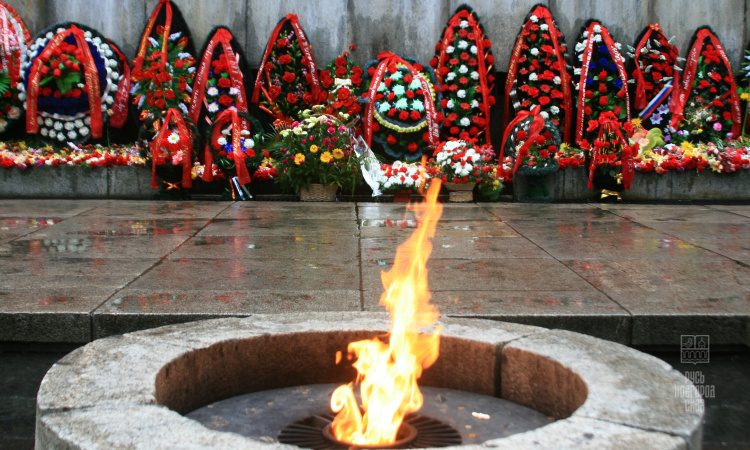 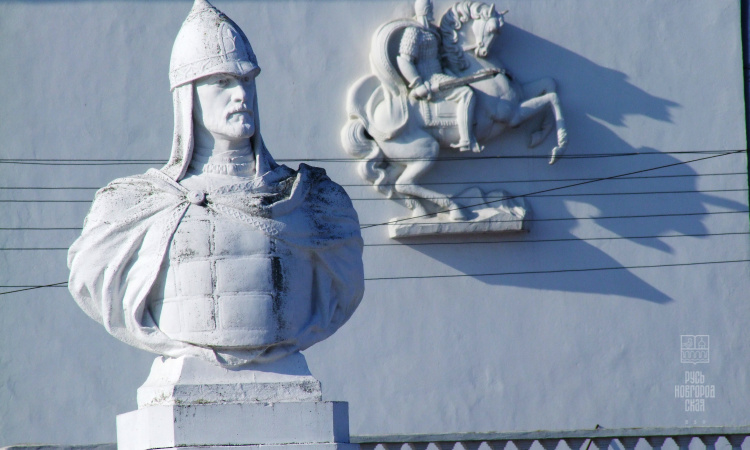 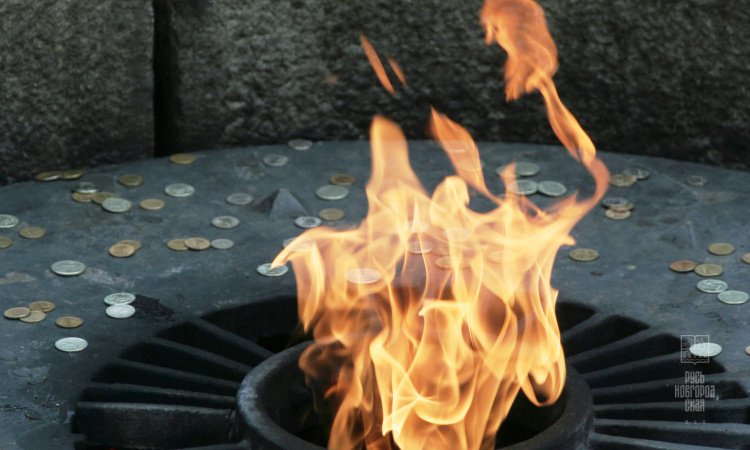 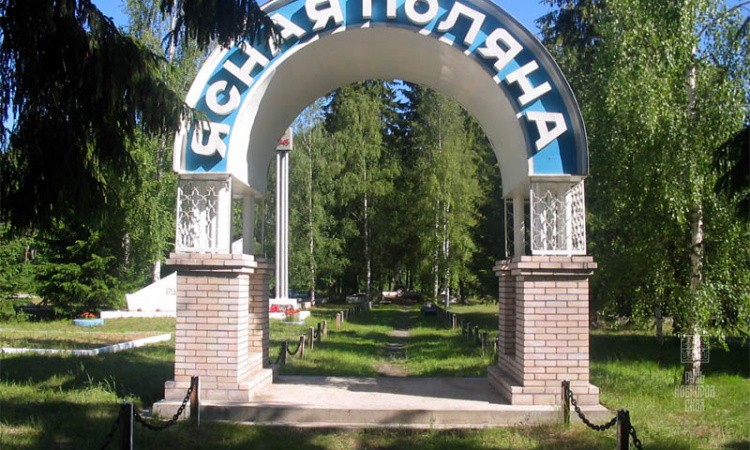 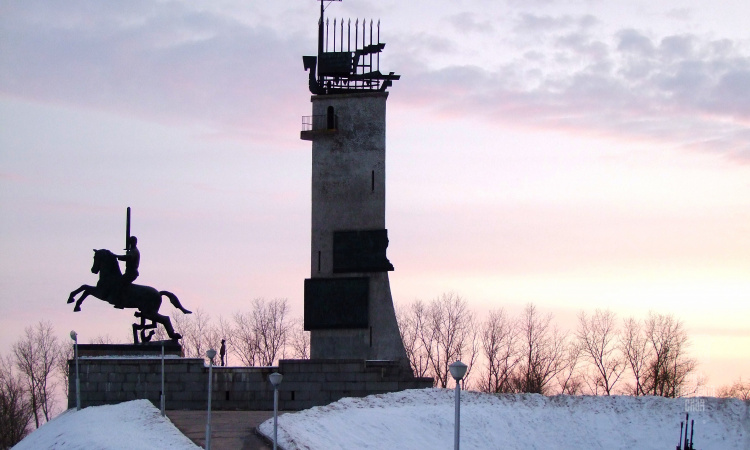 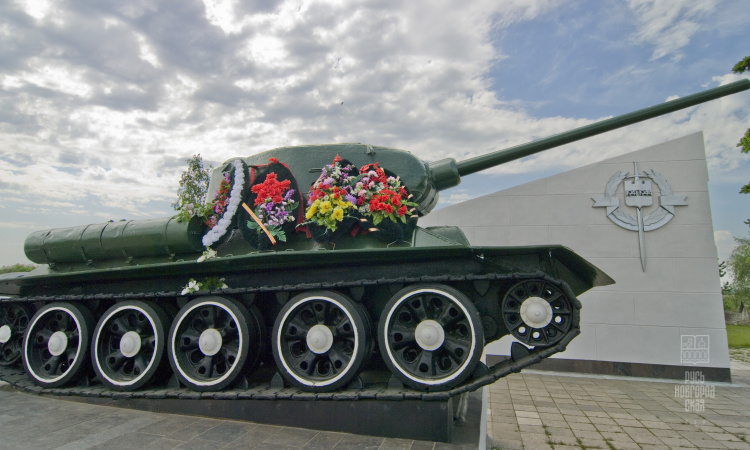 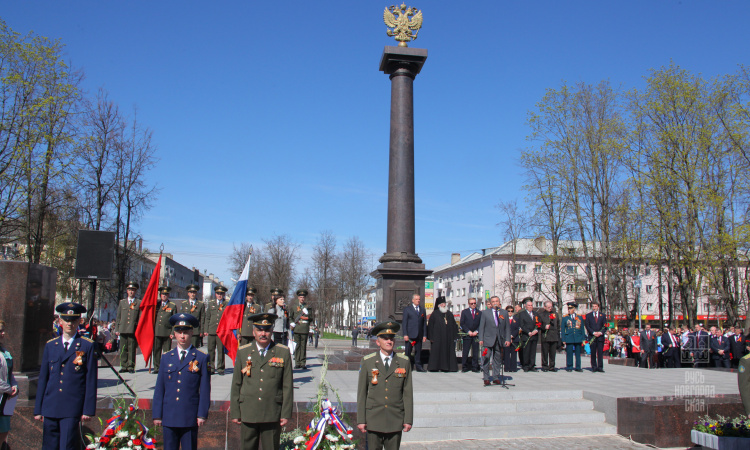 The middle of the 20th century was one of the most tragic periods in Russian history, the Great Patriotic War, which claimed over 20 million lives in the Soviet Union and ended on 9 May in the victory of the Soviet Army and people over Nazi Germany.

Soviet troops left Veliky Novgorod on 19 August 1941. The Nazi invaders occupied the region for 883 days, plundering Russia’s heritage and destroying the city. The red flag was raised on the ancient walls of the Novgorod Kremlin on 20 January 1944. The Red Army, including servicemen from Novgorod, fought valiantly and selflessly in defence of the homeland. The title of honour City of Military Glory was bestowed on the city of Veliky Novgorod by a presidential executive order in 2008.

The people of Veliky Novgorod continue to honour the memory of the war and their compatriots who died fighting the Nazi war machine. There are many monuments, steles, memorial signs and obelisks dedicated to that tragic period in Veliky Novgorod. You can see them on a tour of war memorials in the city.

A monument to Prince Alexander Nevsky stands at the entry to the city. He went down in history as a valiant warrior, a wise ruler, and a mighty defender of his homeland, which is why he topped The Name of Russia public vote to determine the greatest figure in Russian history. Attacked by many, he was defeated by none.

The City of Military Glory near the Hall of Military Glory was unveiled on the eve of the 65th anniversary of the Great Victory. The 10 metre pillar with Russia’s coat of arms stands in the centre of a park near the Rossiya cinema centre. The text of the presidential executive order on conferring the title of City of Military Glory on Veliky Novgorod is in a cartouche on the front part of the monument, and the city’s coat of arms is depicted on the other side. Four small arrows in the court’s corners depict four periods in the military history of the city: Ancient Rus, the Grand Duchy of Moscow, the Russian Empire, and Modern History.

On your way to the city centre you can see the monument to Leonid Golikov next to the Children’s Art Centre. A teenage freedom fighter, Golikov was born in Lukino, Parfinsky District. As a very young but very dedicated patriot, he took part in 27 combat operations during the war, with 78 confirmed kills of German soldiers and officers. He was posthumously honoured with the title Hero of the Soviet Union.

The Eternal Flame of Glory monument is located in the Kremlin between Zlatoust tower and the site where the Resurrection tower once stood. The flame was lit on the 20th anniversary of Victory over Nazi Germany from the flame that was brought from the Field of Mars in St Petersburg. The inscription on the memorial reads: “The fabric of life is the courage of the people, and immortality is rooted in their heroism. Here lie the soldiers of the Great Patriotic War who did everything for Victory. Eternal glory to them.” Various events are held at the monument, veterans are honoured, and flowers are brought here to commemorate the fallen heroes.

The Victory Monument standing on the bank of the Volkhov River near the Kremlin was unveiled on the 30th anniversary of Veliky Novgorod’s liberation from the Nazi occupiers. It includes the sculpture of a rider on a horse standing on its hind legs, a symbolic image of a Russian warrior. The warrior is holding up a sword in his right hand, and the horse is trampling on the Nazi swastika.

Another landmark on the former bulwark of the outer city around the Kremlin is the Memorial Complex erected for the 30th anniversary of the city’s liberation.

The complex is “guarded” by two ZIS-3 76mm anti-tank guns and a T-70 tank. The ZIS-3 gun made in 1942 was the most popular anti-tank weapon during the Great Patriotic War. The T-70 tank, which was raised from Lake Ilmen and installed at the complex in 1964, took part in the liberation of Veliky Novgorod from the Nazi invaders.

One more memorial commemorating the fallen stands in Yaroslav’s Court on the other bank of the Volkhov River, between the river and the Church of St Paraskevi. In January 1942, Ivan Gerasimenko, Leonty Cheremnov and Alexander Krasilov threw themselves on the guns slits of enemy emplacements to save their comrades and ensure the victory of their company. An obelisk to the Heroes of the Soviet Union who gave their lives to the homeland has also been erected at the site of their heroic death on the riverbank.

Alexander Pankratov was the first man to do this during the defence of Veliky Novgorod in 1942. He threw himself on top of an enemy machinegun. An obelisk commemorating Hero of the Soviet Union Alexander Pankratov stands at the exit from the city towards Moscow, on the left bank of Maly Volkhovets where the battle took place. His portrait sculpture was unveiled on the 70th anniversary of the Great Victory in a public garden at the intersection of Pankratova and Rogatitsa streets.

A short distance from it is the Defence Line Memorial. The inscription reads: “The advance of German troops was stopped here in August 1941. For 795 days after that, the servicemen of the Volkhov Front held off the enemy.” Standing near the central stele is a T-34 tank, the main battle tank in the Soviet Army until the middle of 1944, when it was replaced with the T-34-85.

The Volkhov Front was involved in the Novgorod-Luga Offensive Operation in 1944, when Veliky Novgorod was liberated. A monument to Volkhov Front pilots – a MiG-17 aircraft – was installed in Kolmovo 40 years after the war. The inscription reads: “To the pilots of the Volkhov Front from grateful Novgorodians on the 40th anniversary of the Soviet people’s Victory in the Great Patriotic War of 1941-1945.”

The Valley of Death is located near Myasnoi Bor on the way towards St Petersburg. During the war, it became the final resting place for tens of thousands of Russian, German and Spanish servicemen. Soviet soldiers died protecting the besieged Leningrad. Attempts were made in January 1942 to lift the siege, but the Red Army was heavily outnumbered. So many lives were lost during the attacks that the narrow strip of forests and marshes came to be known as the Valley of Death.

Soviet soldiers gave their lives to protect Russia’s independence in Myasnoi Bor. As many as 20,000 of them are buried at the local cemetery. The memorial complex is located on the 535th kilometre of M10 Russia Motorway. An alley leads to an Orthodox chapel nearby. It is a structure without walls or doors, with a cupola formed by metal ribs. Standing on both sides of the alley are granite slabs with the names of the soldiers buried here.

The Dolina Search Party named after Nikolai Orlov, the country’s largest search association, oversees the search for the remains of missing soldiers and their burial in the Novgorod Region. Over 25 years since its establishment, it has found and buried over 105,000 Red Army soldiers and officers and identified over 20,000 of them.

One more large memorial is located in the Parfinsky District. Every year on 9 May, district residents and members of the Dolina Search Party gather at the Yasnaya Polyana War Memorial to commemorate those who died to bring about the Great Victory.

The common grave of Soviet soldiers is located in Korovnikova Street in the Zapadny District of Veliky Novgorod. The reason for this is that the street has been named after Colonel General Ivan Korovnikov, commander of the 59th Army which routed Germany’s Army Group North and liberated Novgorod during the Novgorod-Luga Offensive.

A memorial to the 229th Rifle Division stands near the Khutyn Monastery of Saviour’s Transfiguration and St Varlaam. Even from afar you can see the huge figure “229” and a hand grasping a sub-machinegun, which appears to be rising from the earth. The inscription reads: “This is the site where 1,075 soldiers of the 229th Rifle Division fought the Nazi invaders and fell defending the homeland. March-April 1943.” Schoolchildren come here every spring to lay flowers, commemorate the fallen and meet with war veterans.

In Staraya Russa, you can visit a unique Museum of the North-Western Front, the only museum in Russia dedicated to the operations of a large group of armed forces. Visitors can see this history through the eyes of those who lived it. The exposition incudes wartime weapons, the models of Soviet and German equipment, the interiors of a partisans’ dugout and a safe house of underground resistance fighters. Many of the exhibits were donated by those who fought defending Staraya Russa.