The estate of Duke Leuchtenberg (Gory Estate) is located in the village of Turbinnoye. It is located at the top of a hill, and the position gave the estate its name (Gory means “mountains” in Russian).

The Gory Estate belonged to Duke Nicholas Leuchtenberg, great grandson of French Empress Josephine, Knight of the Order of St George, and a prominent figure in the White movement.

The estate commands a breathtaking view of Lake Borovno.

In the late 19th century, Duke Leuchtenberg bought the Gory estate, which belonged to landowner Alexandra Gromova. He paid two million roubles for it at an auction.

There was a three-storey palace with a round two-tier belvedere and a turret in the centre of the complex. The estate had a number of adjacent stone buildings: a church, two-storey residential house, a summerhouse, a kitchen wing, a pool hall, cottages for the housekeeper and the gardener, a cottage for servants and workers, a carriage house, a smithy, an ice cellar, a greenhouse, and stables with a cowshed. There was even an underground passage from the palace to the lake shore.

The central part of the estate was located on a hill on the western bank of Lake Borovno. A stunning view of the lake and the surrounding area could be seen from everywhere on the estate, which gave it special value and significance.

Near the estate, there was a village of Perevoz, or “crossing,” so called because there was an ancient crossing of Lake Borovno there, near Voskresensky Nos, in the narrowest place on the lake. It was crossed over the ice in winter and on rafts and boats in the summer, with cargo, people and cattle.

There were six ponds in the enormous park covering over nine ha, as well as an artificial waterfall. Linden and birch alleys were mixed with maples and pines, and houses were surrounded by flowerbeds. A beach and a boat dock adorned the shore of the lake.

In the late 1920s and early 1930s, the palace and church were dismantled and the building materials were sold off. The spot was later covered with asphalt, and a bus stop was built there. During the construction of the Gory-Okulovka road, the crypt of the landowner Gromova was destroyed.

Some buildings were used by the collective farm, and the two-storey building housed the village school. 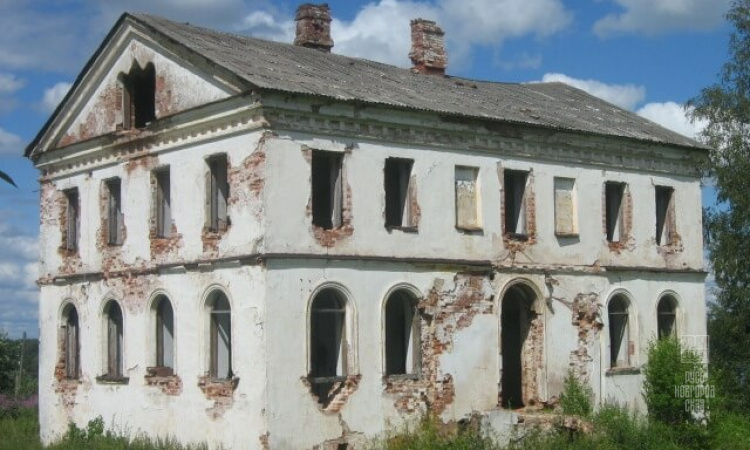