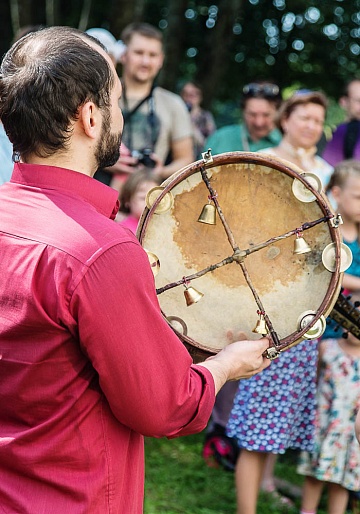 In the memory of Vladimir Ivanovich Povetkin

The International festival of Musical Antiquities «SLOVISHA” in the memory of Vladimir Ivanovich Povetkin was held for the first time in Veliky Novgorod in August 2017. The second festival took place in August 2018. Now it is supposed to become an annual event.

The symbol of the festival is the five-stringed lyre-shaped gusly (old Russia musical instrument) with a carved inscription “SLOVISHA”, which was found in 1975 in Veliky Novgorod at the Trinity excavation site in layers of the 70s of the XI century.

The festival is dedicated to the memory of Vladimir Ivanovich Povetkin, an outstanding scientist, archeologist, artist, musician, honored worker of culture of the Russian Federation, Honorary Citizen of Veliky Novgorod, founder of the Centre of Musical Antiquities.

The heart of the festival is the Centre of Musical Antiquities, founded by Vladimir Ivanovich Povetkin in 1990.

At the same time, cultural and educational program is being implemented: exhibitions, lectures and concerts on the musical culture of ancient Novgorod, consultations on reconstruction of archeological and ethnographic musical instruments.

Plucked gusly is rightfully considered to be the musical symbol of Veliky Novgorod.

Archeological finds of Novgorod, including the finds of different types of guslies are the main material source for history of ancient Russian music. This is the largest collection of authentic evidence of the existence of medieval musical instruments in Europe. Thanks to the work by Povetkin it became possible not only to reliably restore the appearance of those instruments, but also to hear their possible sounding. Besides, due to collaboration of archeologists and specialists on ethno music, the living tradition of playing the wing-shaped gusly, constructively going back to the archeological gusly, was fixed in the 80s of the XX century in rural areas of Novgorod, Pskov and Tver regions.

Further comparison of the instruments, found in Novgorod and Novgorod land, with the traditions of neighboring nations has convinced the researchers that the wing-shaped gusly is one of the varieties of the Baltic psaltery. It shows that in spite of its’ original peculiarity the Novgorod gusly is a part of the instrumental tradition common to the Baltic region. Other musical instruments, archeologically found in Novgorod, also reveal the similar connection of the musical culture of Novgorod with other regions and cultures.

Founders of the festival

◦ Government of the Novgorod region

◦ Actualization of the cultural heritage in the field of traditional music-playing, involving people in playing the ancient musical instruments

Audience of the festival

Major events of the festival

◦ Lecture on musical archeology of Novgorod

◦ Lectures and presentations of the participants of the festival

◦ “Music in the architecture of the Ancient City” project

◦ Concert at the Yaroslav’s Court

◦ Interactive sites for children and their parents

◦ Handicraft fair (including selling of guslies)